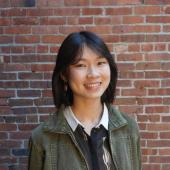 Anna Yu Wang (M.A. 2020, Harvard University; B.Mus. 2017, McGill University) is a music theorist and ethnographer concerned with what it means, and what it takes, to listen across lines of difference. Her current research examines how intuitions for tonality, form, and temporal organization change based on cultural context. Her fieldwork has taken her to Anhui province in China and northern Taiwan to learn how huangmei opera and kua-a opera musicians articulate their experiences of musical syntax, and illuminates how olfactory and gustatory sensory frameworks and cosmological ideals of changeability and unfathomability undergird constructions of mode, meter, and melodic contour in these traditions. Her findings challenge assumptions of ocular-centrism, categorical precision, teleology, and symmetry that underlie Austro-Germanic musical intuitions, and thereby critically explores the limits of Western musicality. Her work has been presented in North America and Asia, including at the New England Music Cognition Group (NEMCOG) meeting, Society for Ethnomusicology (SEM), and Society for Music Theory (SMT). Her paper, “Perceiving 板眼 Banyan: Temporal Syntax Unbeholden to Periodicity,” was recognized with the SMT Student Presentation Award and the Patricia Carpenter Award from the Music Theory of New York State (MTSNYS).
Yu Wang serves as co-chair of the SMT Analysis of World Music Interest Group, a position from which she advocates for the meaningful and ethical inclusion of colonized and neglected musical traditions in music teaching and scholarship. In this capacity, she has convened several scholarly panels on topics including Provincializing Western Art Music Syntaxes, Translations of Underrepresented Languages in Music Theory, and Pedagogy of World and Vernacular Music Theories. She is also Associate Editor of the music pedagogy journal Engaging Students and co-editor of its upcoming special volume, “Beyond Western Musicalities.”
Outside of teaching at MIT, Yu Wang is currently completing her Ph.D. in music theory at Harvard University, supported by a Doctoral Fellowship from the Social Sciences and Humanities Research Council of Canada. Additionally, she is on faculty at the Longy School of Music where she was appointed to create and pilot a new undergraduate music theory curriculum that promotes inclusivity and multicultural literacy.