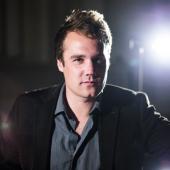 Brian Buch (b. 1984) received his Doctorate in Music Composition from Boston University and his Bachelor of Music degree in Music Composition with an emphasis in Piano Performance from the Jacobs School of Music at Indiana University. Brian is on faculty at the Massachusetts Institute of Technology and the New England Conservatory of Music’s School of Continuing Education and privately teaches composition, classical and jazz piano, ear training, and courses in developing perfect pitch. As a composer, Brian writes for all genres of classical music from orchestral to chamber and solo instruments and is a founding member of the International Cat Murr Composer's Society. His principal composition teacher and mentor is Alla Cohen and has also studied composition with Don Freund, P.Q. Phan, Sven-David Sandström, Sam Headrick, Joshua Fineberg, and Richard Cornell. Brian has studied classical piano with Faina Koffman, Edward Auer, Reiko Neriki, Gerald Stofsky, and jazz piano with Dick Odgren. Brian’s works have been performed throughout the US, Canada, Europe, Estonia, Bosnia, Serbia, and Russia.

As a pianist, Brian is constantly in demand and frequently performs classical and jazz music throughout the country. He has performed for elite circles in major cities around the country and for well known celebrities and high-ranking government officials. He is active in premiering new works both as a soloist and participant in chamber ensembles. Brian frequently conducts and works with groups focused on contemporary music..