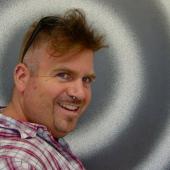 David R. Gammons is a director, designer, visual artist, and theatre educator.​  He is currently a Lecturer in Theatre Arts at Massachusetts Institute of Technology and an Associate Professor at The Boston Conservatory at Berklee.  He teaches a range of courses in acting, design and visual thinking, text analysis, devised theatre, and contemporary performance practice.

This season Mr. Gammons will be directing a new adaptation of Frankenstein as a joint production of the Nora Theater Company, Underground Railway Theater, and the MIT Catalyst Collaborative, as well as a production of Ionesco's The Bald Soprano at the Boston Conservatory.   Recent directing projects include Macbeth for Commonwealth Shakespeare Company, The Antigone Project for Emerson Stage, and a revival of Adrienne Kennedy's The Owl Answers for Harvard University's Theatre, Dance, and Media Department.  Additional professional directing credits include Edward II​, The Comedy of Errors, Medea, The Hotel Nepenthe, The Duchess of Malfi, and Titus Andronicus (2007 Elliot Norton Award for Outstanding Director) for Actors’ Shakespeare Project; the New England premieres of Hand to God, ​Necessary Monsters, The Whale, The Motherfucker with the Hat (2013 Elliot Norton Award for Outstanding Production), Red (2012 Elliot Norton Award for Outstanding Production), and Blackbird at SpeakEasy Stage Company; the world premieres of The Farm by Walt McGough and ​​The Salt Girl by John Kuntz at Boston Playwrights’ Theatre; the New England premieres of Cherry Docs, The Lieutenant of Inishmore and My Name is Rachel Corrie at The New Repertory Theatre; John Kuntz’s The Hotel Nepenthe at the Emerging America Festival and Necessary Monsters at the Summer Playwrights' Workshop at the Huntington Theatre; and The Winter’s Tale as part of the Shakespeare Exploded Festival at the American Repertory Theatre.

Mr. Gammons’ recent directing projects have been nominated for thirty-six​ Elliot Norton Awards and forty-six Independent Reviewers of New England (IRNE) Awards.  He was most recently awarded the 2017 Elliot Norton Award for Outstanding Director for his productions of Edward II and Hand to God.

Mr. Gammons is a graduate of the Directing Program of the American Repertory Theatre Institute for Advanced Theatre Training at Harvard University, and of the Visual and Environmental Studies Department of Harvard University.