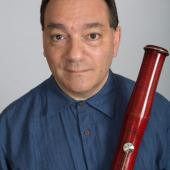 Bassoonist Ronald Haroutunian is an active performing artist in the New England area. He has been principal bassoonist with the Boston Modern Orchestra  Project since it’s founding in 1996.  Mr Haroutunian started his formal musical training at New England Conservatory, studying with Matthew Ruggiero, and then further studies with Sherman Walt at Boston University. Reed making with Louis Skinner. In addition to performing with  Boston Modern Orchestra Project ,  Mr. Haroutunian is Principal Bassoon with the Rhode Island Philharmonic Orchestra, Boston Pops Esplanade Orchestra, extra player with the Boston Symphony Orchestra and Boston Pops, having served as second bassoon with the BSO in the 1999-2000 season.  Other ensembles include Boston Ballet, Boston Lyric Opera, Boston Classical Orchestra, Pro Arte Chamber Orchestra.   Mr Haroutunian has been on tour  with BMOP in New York City, with the Boston Symphony on their 1998 European Tour, with the Boston Esplanade Orchestra to Japan with John Williams and Keith Lockhart. With Boston Ballet in NYC, , and also numerous USA tours with the Pops.    Mr. Haroutunian has been a soloist with BMOP, Boston Pops, Hartford Symphony, Boston Classical Orchestra, New Hampshire Symphony, Pro Arte Chamber Orchestra.  He currently teaches bassoon at  , MIT, Boston University, Tufts University, as well as private teaching.

He has coached and taught at BUTI and has extensive chamber music experience having worked in the past with the  New England Wind Quintet, New England Reed Trio,  Monadnock Music, and Alea III, to name a few. Mr Haroutunian’s commitment to performing new  music  has been active since 1974, and has been involved with numerous premieres  and commissions. He has recorded Elliot Schwartz’s Chamber Concerto V as soloist with BMOP, and chamber music with Fox and Friends with Madeintheshademusic.com.  In addition to recordings with BMOP, Mr. Haroutunian has recorded on other labels such as DG, Philips, Northeastern, Albany, and others.