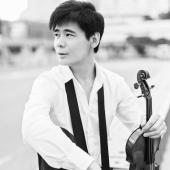 Winner of the prestigious Yehudi Menuhin International Violin Competition in 2010, violinist Angelo Xiang Yu is regarded as one of today’s most talented and creative young violinists. His astonishing technique and exceptional musical talent have won him consistent critical acclaim and enthusiastic audience response worldwide for his solo recitals, orchestral engagements and chamber music performances.

In North America, Angelo Xiang Yu’s recent and upcoming orchestral engagements include appearances with the Pittsburgh, Toronto, Vancouver and Houston symphonies, as well as with the North Carolina, Alabama, Charlotte, Rhode Island, Puerto Rico, Grand Rapids, Toledo, Modesto, Tucson, Elgin, Binghamton and Lake Forest symphonies. In the summer of 2016, he participated for the second season in a row in Portland, Oregon’s Chamber Music Northwest festival and made his debut at the Green Music Center Chamberfest in Sonoma, California. Internationally, he has appeared with the Shanghai Symphony Orchestra, Auckland Philharmonia, Munich Chamber Orchestra and Oslo Philharmonic Orchestra.

An active recitalist and chamber musician, Mr. Yu has appeared in recital in Berlin, Paris, Beijing, Singapore, Shanghai, Auckland, Chicago, Pittsburgh and Boston. He has participated as a chamber musician in several of the world’s leading summer music festivals including the Verbier Festival in Switzerland, Bergen Festival in Norway and Chicago’s Ravinia Festival, and attended the Kronberg Academy in Germany and the Perlman Music Program in New York. During the 12/13 season, Mr. Yu was invited to tour with Miriam Fried and chamber musicians from the Ravinia Festival’s Steans Institute and performed concerts in New York, Chicago, Florida and throughout New England. He was also recently featured as the Artist in Residence on American Public Media’s nationally broadcast radio program Performance Today.

Born in Inner Mongolia, Angelo Xiang Yu moved to Shanghai at the age of 11 and received his early training from violinist Qing Zheng at the Shanghai Conservatory. He is currently studying at the New England Conservatory of Music in Boston, where he is the recipient of the Irene M. Stare Presidential Scholarship in Violin and is a student of Donald Weilerstein, Miriam Fried, Kim Kashkashian, and served as the teaching assistant of Donald Weilerstein. After earning his Bachelor’s degree in 2012, Mr. Yu was the only instrumentalist invited to be a candidate for NEC’s prestigious Artist Diploma, which he was awarded in May 2014.