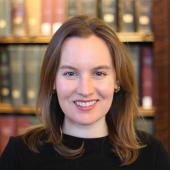 An ethnomusicologist and musician, Dempsey is a specialist on the music of contemporary religious communities across Brazil, particularly in the African-and European-derived rituals of Congado, Candomblé, and Umbanda. To understand the interplay between questions of race, gender, and politics in musical contexts, she conducted two and a half years of archival and ethnographic field research in Brazil. Dempsey received her BA in Political Science, Economics, and Latin American Studies from the University of Notre Dame and her PhD in Ethnomusicology from the University of Chicago. Dempsey is a former Mamolen Fellow at the Hutchins Center for African and African American Research at Harvard University and currently a Fellow in the Department of Music at Harvard University. Her articles have appeared in the Yale Journal of Music & Religion (YJMR), Transition: The Magazine of Africa and the Diaspora, ReVista: Harvard Review of Latin America, and Ethnomusicology (forthcoming). Dempsey is thrilled to join MIT’s Music & Theater Arts community.