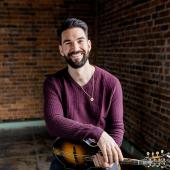 Jacob’s experiences are diverse and stem from his explorations as an artist—from folk and jazz to classical and contemporary forms of music. This eclectic combination has led him on a path of creative problem solving and developed his ability to manage all kinds of musical events—as performer, audience member, and producer. Jacob has traveled around the world performing in a variety of settings including a vocal ensemble in Shanghai, a bluegrass band at a folk festival in Slovakia, Free Improvisation performances at Jordan Hall in Boston, and a small jazz ensemble at Dizzy’s Club in New York. Jacob grew up in Wyoming surrounded by folk music’s rich aural traditions and began playing mandolin at a young age. After receiving his Bachelor of Arts in Music with an emphasis in Vocal Performance at the University of Wyoming, he continued to pursue his passion, and received his Master of Music in Contemporary Improvisation at the New England Conservatory in Boston. After graduating, Jacob taught in an El Sistema program until he decided to continue his academic studies at the Berklee Global Jazz Institute. He received his second masters degree there and studied with Artists Danilo Perez, Terri Lyne Carrington, Joe Lovano, George Garzone, and John Patitucci. Jacob is also passionate about education; working with people of all ages, and creating spaces for people to experience the joy of music. He is committed to bringing his unique background in music to his role at MIT and to help cultivate a rich musical experience for the MIT community.