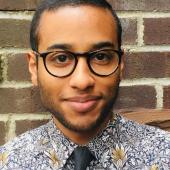 Marcus R. Pyle is currently a Visiting Scholar on the Faculty of Music and Theater Arts at MIT, recipient of the Howard Mayer Brown Fellowship from the American Musicological Society, and Ph.D. candidate in Historical Musicology at New York University. His research centers on depictions of femmes fatales in French and German fin de siècle opera, intersections of gender and sexuality, continental philosophy, and African American lives and music.

His dissertation is titled, “Deconstructed Divas: Deconstructed Divas: Philosophy and the Operatic Femme Fatale.” Pyle studied Viola Performance at the Juilliard School (M.A.) and at the Royal Academy of Music in London (B.A.), and Comparative Literature at Dartmouth College. His article, “The Rhetoric of Seduction; or, Materiality under Erasure,” is forthcoming in the spring issue of 19th-Century Music.

Pyle is also Founder and CEO of ChamberWorks (est. 2010), a music institute for beginning to intermediate string players in Dallas.