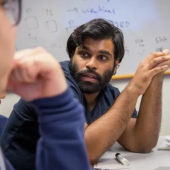 Ryaan Ahmed enjoys a varied career as an educator, software developer, and musician. He is a Senior Research Engineer and the Associate Director of the Programs in Digital Humanities at MIT, where he manages the day-to-day operations and research activities of the Programs, with a particular focus on connecting faculty research in the humanities with student researchers from engineering fields. Outside of his work at MIT, Ryaan has been involved in a number of technology startups, most recently founding Artusi, a company creating interactive music theory workbooks and textbooks. As a musician specializing in the performance of Baroque opera, Ryaan has worked with the Boston Early Music Festival, Welsh National Opera, English Touring Opera, Shakespeare's Globe Theatre, and many other early music groups and opera companies. Ryaan holds a bachelor's degree in Computer Science from Harvard University and a master’s degree in Early Music from the Eastman School of Music, where he studied lute with Paul O’Dette and was supported by the Paul and Daisy Soros Fellowship for New Americans.