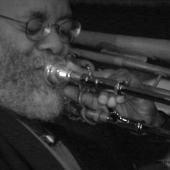 Bass trombonist and tubaist Bill Lowe has been a major force in the music world for over forty years as a performer, composer, producer, and educator. He has worked with most of the masters of African-American creative music, across all genres and musical cliques, from musical legends like Dizzy Gillespie, Eartha Kitt, and Clark Terry, to the leaders of the avant-garde like Muhal Richard Abrams, Henry Threadgill, and Cecil Taylor, to under-heralded greats like George Russell, James ‘Jabbo’ Ware and Bill Barron. Long time member of the AARDVARK Jazz Orchestra as well as the MAKANDA PROJECT, Lowe has co-led the Boston Jazz Repertory Orchestra, the Bill Lowe/Phillipe Cretien Quintet, and JUBA, co-produced Boston’s annual John Coltrane Memorial Concert, and composed several major works, including his opera, Reb’s Last Funeral, his ongoing interdisciplinary project Signifyin’ Natives, and the music/theater piece Crossing John at the Crossroads. Current projects include Lowe's creation of "Kabnis, the Gothic Detective Musical" a setting of Jean Toomer's novel CANE as a drama with music. “PIECES OF CANE/KABNIS!”, a fully staged workshop premier with 10 actors on a specially designed set, including the SIGNIFYIN’ NATIVES  8 piece improvising ensemble, and video projection of animation and archival stills, was presented June 23, 24, 25, 2017 at Hiberian Hall in Boston. In January 2012 and 2013, Lowe produced, directed and composed music for a new production of Ed Bullins' play STREET SOUNDS. As an educator, Lowe has taught at several major universities, lectured throughout the world from Cuba to Paris, and mentored countless young musicians. The LOUIS ARMSTRONG Visiting Professor at Columbia University in 2007, the STERLING A. BROWN Visiting Professor at Williams College in 2009, a visiting professor of Africana Studies and English at the University of Pennsylvania in 2013, Lowe was a visiting professor of improvisation at MIT in Cambridge in 2014. The Madison Park Development Corporation presented to Lowe in ceremonies at Hibernian Hall the 2015 Community Catalyst Award.

Lowe is a resident of Lower Mills, Dorchester, MA.