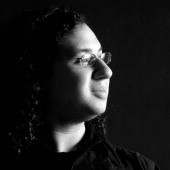 Derek David is a composer, conductor, and music educator based in Boston, Massachusetts. His dramatic and vibrant chamber music has been performed in both Europe and the United States and has received great recognition from audiences and critics alike.  Derek’s String Quartet (2011), has been met with international praise and repeated performances throughout the United States. It was described by Sabino Pena of France’s Classiquenews.com as “a true musical jewel of the 21st Century.” The quartet was awarded both the EAMA Nadia Boulanger Institute Prize and the Morton Gould ASCAP Award in 2011, as well as first place in the American prize in 2015. Additionally, he is the current recipient of the 2018 SFCM Hoefer Prize for his accumulative body of work from over the past 10 years. Derek is currently the musical director of ‘A Besere Velt’ - אַ בעסערע װעלט, one of the few choirs in the world dedicated to the performance of Yiddish repertoire and the only Yiddish activist group, promoting economic and racial social justice.

Dr. David holds a DMA from the New England Conservatory of Music, and addition to his work at MIT, is currently a teaching fellow at Harvard University where he is a five-time recipient of the “Harvard University Distinction in Teaching Award”. Outside of composition, his musical areas of interest also extend to medieval theory and musicology, The Beatles, and Jewish Music.