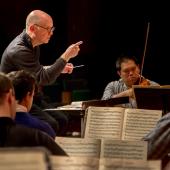 Dr. William Cutter is Director of Choral Programs at the Massachusetts Institute of Technology where he is conductor of the M.I.T. Concert Choir and Chamber Chorus.  A Professor of Core Studies and former Director of Choral Studies at the Boston Conservatory, he currently teaches harmony and ear training, and is Artistic Director of the Boston Conservatory Summer Vocal/Choral Intensive.  He has also held academic posts at the Boston University School for the Arts, the University of Lowell and the Walnut Hill School for the Arts.

As assistant to Maestro John Oliver for the Tanglewood Festival Chorus from 1993 to 2017, Cutter served as rehearsal conductor or chorus master for various programs of both the Boston Symphony and the Boston Pops.

In January of 2016, Cutter was guest chorus master with the Boston Symphony for their performance of Mendelssohn’s incidental music to Midsummer Night’s Dream in collaboration with professional actors from the Boston area.

In October 2014, Cutter prepared the TFC for Maestro Bramwell Tovey in a performance of Ein Deutsches Requiem with the Boston Symphony.   The Boston Classical Review wrote: “The heroes of the evening were the members of the Tanglewood Festival Chorus, prepared by Bill Cutter, who sang with crystalline diction and a tender emotional touch.”  The Boston Globe wrote: “But the star of the evening was the Tanglewood Festival Chorus, massive in “Denn alles Fleisch es ist wie Gras”; sprightly in “So seid nun geduldig”; swinging in “Die Erlöseten des Herrn”; an irresistible force in “Herr, du bist würdig,” and crystal clear everywhere.  In short: heaven on earth.”

In August 2002, Cutter prepared the Tanglewood Festival Chorus for their performance of Beethoven’s Symphony #9 under the baton of Sir Roger Norrington. During the summer of 2009, Cutter was chorus master for “Red Sox Album” CD recorded by the Boston Pops.  He also prepared backup singers for a concert with James Taylor at Tanglewood in August 2009 and August 2011.  In 2010, Cutter prepared the women of the Tanglewood Festival Chorus for a performance of Holst’s “The Planets” at Tanglewood under the baton of David Zinman.   For the 2012-2013 season, Cutter was rehearsal conductor for the Tanglewood Festival Chorus in performances of Poulenc’s “Stabat Mater”, Britten’s “War Requiem”, Verdi’s “Requiem” and Haydn’s “Mass in Time of War”, all with the Boston Symphony Orchestra.  For the 2014 season he prepared the Finale of Act 2, “Aida” of Verdi; a concert version of Bernstein’s “Candide”; the choral Finale of Mahler’s 2nd symphony as well as Beethoven’s Choral Fantasie.

Other guest conducting appearances include The Walnut Hill School for the Arts (2016-2017); Massachusetts Intercollegiate Choral Festival (2015, 2016), North Carolina Summer Institute of Choral Art (2014), New England Conservatory Chamber Singers (2007),Chorus Pro Musica in Boston (2010), chorus master for the Montreal Symphony Chorus preparing Haydn’s “Creation” for Maestro Kent Nagano (2010) and the Boston Choral Ensemble where he conducted a program entitled “Bang”, music for percussion and chorus, featuring works by Dominick Argento, Leonard Bernstein, Peter Klatzow, and Timothy Takach (2011). His M.I.T. Chamber Chorus performed with the Kronos String Quartet as well as the Bang on a Can All-Stars in a new version of Brian Eno’s “Music for Airports”. In March of 2012, Cutter served as chorus master for a performance of Andrew Imbries “Songs of Then and Now” with the Collage New Music Ensemble and women from the MIT Chamber Chorus.

Dr. Cutter has also served on the faculty of the North Carolina Summer Institute of Choral Art and is in demand as a guest conductor and adjudicator throughout the United States and Canada.  In 2002,  he was asked to serve as a choral consultant for the Boston Symphony’s educational outreach program.

With advanced degrees in composition, Cutter maintains an active career as a composer with an upcoming performance by the Mansfield University Chamber Singers.  The Chamber Singers will premeire his Ocean Blues for chorus and alto saxophone in October 2018.  The Boston Pops premiered his Christmas fanfare for chorus and orchestra, “Sing Noel” (2015) and the MIT orchestra and chorus premiered his a blessed unrest in April of 2016.  His Marian Anthems will be published by Hal Leonard in the Fall of 2018.  He has had other commissions and premieres by The Chatham Chorale, the Illinois State University School of Music Orchestra, Cantata Singers,  PALS Children’s Chorus, Monmouth Civic Chorus, the New Jersey Gay Men’s Chorus, the Boston Pops, the New World Chorale in Boston, Melodious Accord of New York City, and Opera Omaha.

As a professional tenor, he has sung with the premiere vocal ensembles in Boston, including the Handel and Haydn Society, Cantata Singers, Boston Baroque, Emmanuel Music, and the Harvard Glee Club.  He has been a featured soloist on the Cantata Singers Recital Series and has been a recitalist on the M.I.T. faculty performance series.