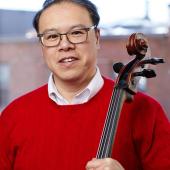 Cellist Andrew Mark received his Bachelor and Master of Music Degrees from the New England Conservatory of Music, graduating with top honors in both performance and academics. His principal teachers have included Bernard Greenhouse, Laurence Lesser, Colin Carr, and George Neikrug. Mark is an active member of Boston's classical music community. He has performed and recorded with such groups as the Boston Symphony Orchestra and the Boston Pops Orchestra since 1989. In 2018 he became the cellist of the Portland String Quartet which was presented Chamber Music America’s Acclaim Award in recognition of outstanding service and cultural contributions to the community throughout its fifty-year history.

From 1987-1993 he was cellist of the Boston Composers String Quartet, which performed throughout the United States and Europe and was winner of the silver medal at the Osaka International String Quartet Competition in Japan. With this ensemble he recorded the string quartets of Daniel Pinkham, Gardner Read, and Leon Kirchner. In 1993 Mark joined the critically acclaimed group, The CORE Ensemble, an international touring trio of cello, piano, and percussion dedicated to the performance of contemporary music. In 2000, the CORE Ensemble received the prestigious MacDermott Award presented by the Massachusetts Institute of Technology for its innovative contributions to the field of chamber music. The Core Ensemble has recorded for New World Records and released a disc featuring solo, duo, and trio works of Pulitzer Prize winning composer Donald Martino and a CD featuring the Triple Concerto of Bernard Rands, commissioned by the Core Ensemble. An accomplished advocate of new music, Mark has collaborated with some of the world's most distinguished composers including Witold Lutoslawski, Donald Martino, John Harbison, and Leon Kirchner, and has premiered nearly 100 works. His recording of Messaien’s Quartet for the End of Time on Ongaku Records has won critical acclaim. The American Record Guide hailed, “These are no ordinary performers. Each player shines in the extended solo passages. It’s brilliant.” In 1988 Mark was named as a United States Artistic Ambassador by the U.S. State Department and has since performed recitals and given master classes throughout the United States, Europe, South and Central America, and the Far East. He has been a guest artist with the Boston Chamber Music Society and at several summer music festivals including the Newport (RI) Music Festival, the Contemporary Music Festival at Tanglewood, the Portland Chamber Music Festival, the Chautauqua Festival, ARIA Academy, Florida International Festival, the Chichibu (Japan) Music Festival, Music from Salem (NY), Killington Music Festival, and the Foulger International Festival. He has recorded for New World, Koch, Albany, Dorian, CRI, Ongaku, and Neuma recording labels.

Mr. Mark continues an ongoing commitment to teaching and is a member of the music faculties of the New England Conservatory Preparatory Division, and The Boston Conservatory where he served as Chair of the String Department from 1995 – 2014. Since 2016, he has been the cello instructor for the highly successful summer Program for the Exceptionally Gifted at the Heifetz Institute in Staunton, Virginia. Professor Mark is the recipient of the 2008 Studio Teacher of the Year Award presented by the Massachusetts chapter of the American String Teachers Association and in 2009 was presented an award for outstanding contributions to string teaching by the Foundation for the Advancement of String Education.