Pullman, WA and The Appeal 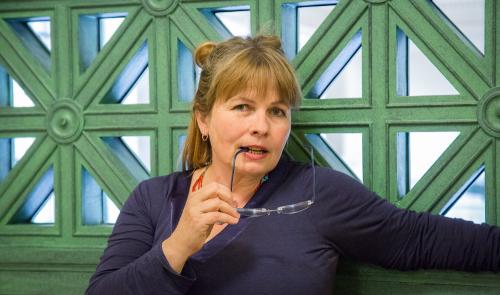 The Dramashop Spring Show will featureThe Appeal and Pullman, WA, two exciting and subversive plays by Korean/American playwright Young Jean Lee, presented in an evening long event by Dramashop and Theater Arts. The playwright will attend the opening performance on April 9 and will participate in a Q & A with the students and the director immediately after the show.

About the Plays:
Confronting the culture of self-help gurus, TED talks and modern age preachers, Pullman, WA is a human outcry against the machine, i.e. against a society that tells us how to live our lives, that we need to be different, happier, more successful, thinner - in short, better than we are, that we need "fixing." It is all about human conditioning. It is funny, deeply disturbing and completely in your face!  VIDEO TEASER

The Appeal, Young Jean's first, was written as a challenge to herself to write a play about her least favorite subject: British romantic poets -which turned into this incredibly funny yet suddenly profound play. What you won't see in this play: a respectful "biopic" portrait of romantic poets, their lives and intellects. What you can expect: a totally irreverent, subversive play that takes intellectualism and scholars down a notch and brings those revered poets back to being ordinary human beings.

About Young Jean Lee:
Playwright, director and filmmaker Young Jean Lee was born in South Korea and raised in the United States. She grew up in Pullman, Washington and attended college at UC Berkeley where she majored in English and subsequently studied Shakespeare for six years in the PhD program. In 2002, she moved to New York to become a playwright. She received an MFA from Mac Wellman’s playwriting program at Brooklyn College. She has written and directed more than 20 shows and toured her work to over thirty cities around the world. Outside her own Young Jean Lee’s Theater Company where she produces her works, Lee is a resident artist with The Wooster Group. Lee is the recipient of a Guggenheim Fellowship, two OBIE Awards, a Prize in Literature from the American Academy of Arts and Letters, a Doris Duke Performing Artist Award and Artist Residency, and many other honors, awards and grants from major Foundations.

About director Anna Kohler:
Since joining the New York theater scene in 1982, Anna Kohler has worked on stage with Elizabeth Lecompte, Stuart Sherman, John Jesurun, Richard Foreman, Fiona Templeton, Steve Buscemi, Werner Herzog, to name a few, and has conceived and performed her own original work - her solo performance D'Arc-ness (Amsterdam 1995), The Human Voice 1995, Cara 2009. As a longtime associate member of The Wooster Group, she worked on their seminal pieces: LSD Just the highpoints..., Temptations of Saint Anthony, Brace Up!, North Atlantic, etc. She performed in Chang in a Void Moon by John Jesurun (2014), Yesterday Happened by Wesley Savick (2012), Medead by Fiona Templeton (2013), and has toured throughout Europe with Ode to the Man Who Kneels, by Richard Maxwell (2009-11), She appeared in movies by Jonathan Demme, Peter Sellars, and Hal Hartley. As a director, she has conceived and directed plays that were produced in Salzburg, Kiel (Germany), Saõ Paulo, and in New York. She also translates plays by contemporary playwrights: Young Jean Lee, Rene Pollesch, Richard Foreman, Richard Maxwell, and many others. As Senior Lecturer in Theater Arts at MIT, she adapted and directed Schnitzler's LaRonde and Chekov's Uncle Vanya, as well as over 30 plays as part of her staged reading series It's Alive!.

About Bozkurt Karasu
Bozkurt Karasu began working on stage in 1991 in Istanbul, Turkey as a production crew member of the Istanbul Festivals organized by Istanbul Foundation for Culture and Arts… After working as a free-lancer production manager and designer there for 13 years he moved to NYC in 2003 to work with The Wooster Group and later joined MIT Theater Arts as technical instructor in October 2012. Besides The Wooster Group he collaborated with and designed for a wide array of artists and ensembles such as Wesley Savick, Findlay//Sandsmark, Armitage Gone! Dance, Richard Maxwell and the New York City Players, The Watermill Center and Robert Wilson, Pina Bausch and Pipilotti Rist. Recent works include Technical Direction of the International Summer Program of The Watermill Center by Robert Wilson (July and August 2014); Lighting and Video Design for the “The Saint Plays” written by Erik Ehn, Directed by Wesley Savick (November 2014); Sound and Video Design for “Bride, Widow and Hag” written by Kim Rosenstock, directed by Shira Milikowsky (January 2015); Consulting in the construction of Performances Venues within Koc Contemporary Art Museum, Istanbul - Turkey (throughout 2016), Videography for Paddy Saul Band, Technical Supervision for Findlay // Sandsmark, Stavanger – Norway and Guest Lecturing at Pulsee 2015, Prague Multimedia Summer School, Institut Intermedii - Prague, Czech Republic (June 2015).

About Sara Brown
Sara Brown is Director of Design in Theater Arts, and holds a MFA from the University of Virginia and a BA from Gustavus Adolphus College.  She teaches classes in theater design and mentors students through their own design and performance projects. She is an active designer in theater, opera and dance. In addition to her many MIT productions - scenic designs include World of Wires at The Kitchen in New York City, A House in Bali as part of BAM’s Next Wave series in 2010, The Temperamentals at The Lyric Stage Company in Boston, The Shape She Makes and The Lily’s Revenge at The American Repertory Theater.

About Kent Barrett
Kent Barrett is a multi-discplinary theatrical designer and artist who has developed a wide ranging body of work and established a national and international presence on the performance scene. A prolific technologist, Kent’s works have been seen in New York City and Internationally with The Wooster Group, The Public Theater, The Brooklyn Lyceum, and Lincoln Center. He works regularly throughout the country as a designer for numerous performing arts institutions including Florida’s storied Hippodrome State Theater, the Rocky Mountain Repertory Theater and Dallas Shakespeare. In addition to his work in theater, dance and performance, Kent has also collaborated widely with the architectural lighting firm L.D.S.E.A.L.

About Tara Nova Webb
Tara Webb is a Swarthmore alum and a theatre artist specializing in costume design. She is especially interested in the nodes where technology and performance intersect as well as sustainability in the arts. She has collaborated with companies in New York and Philadelphia on productions that include substantial multimedia components. She worked with the Wooster Group in New York from 1998 to 2004 on both costume and video for the productions of House/Lights, North Atlantic, Hairy Ape, To You The Birdie! and the restaging of Brace Up! (2003). She also joined the Collapsable Giraffe from 1999 to 2007 as a performer, costumer, and video artist. More examples of her costuming in New York include: Chimera, with Stein | Holum Projects and Cynthia Hopkins’ internationally toured trilogy ofAccidental Nostalgia, Must Don’t Whip ‘Em, and Failure of Success.

Current design work in the Philadelphia area includes: costumes for the Swarthmore College Dance Program and Theater Department, costumes for Drexel University Dance Program, props and costumes for Midway Avenue, The Garden and Return, Return Departure for Nichole Canuso Dance Company, and costumes for New Paradise Laboratories’ 27. In 2013, she helped construct a series of community driven garden sculpture installations with designer Heidi Barr and the East Park Revitalization Alliance at Woodford Mansion. She is currently an artist-in-residence at the Hacktory for 2014 and enjoying thinking about how the outposts of our curated future in art or performance can be elevated by technology. tarawebb.com