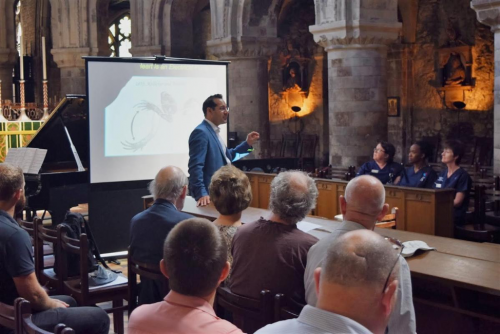 Heart & Music explores the connections between music and heart rhythms. Conceived as an arts-science-medicine event at the intersection of music and cardiology, it forms a vanguard to a Radcliffe Institute for Advanced Study Exploratory Seminar on Music and the Heart: From Mathematics to the Mind.

MIT/MTA alum Elaine Chew (’00 OR PhD, ’98 OR SM), Principal Investigator of the European Research Council project COSMOS at the CNRS and STMS Lab at IRCAM in Paris, follows with a concert of piano music created from “stolen” rhythms, including from arrhythmic hearts. 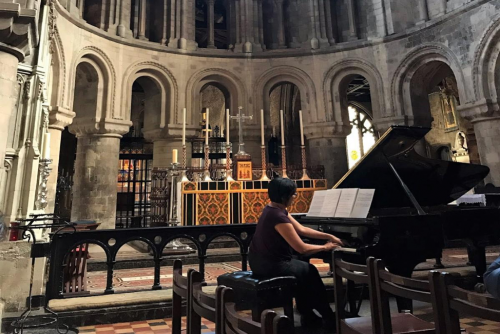 Heart & Music emerged from a larger study on Cardiac Response to Live Music Performance led by Professors Chew, Lambiase, and Taggart. The study, covered in a BBC World Service Health Check program, explores heart-music-brain interactions, and involves patients with biventricular pacemakers / ICDs—intra-cardiac readings are downloaded from the muscles of the patients’ hearts whilst they listened to some of the music featured in this concert.

“I found the whole hour extraordinary: I didn't realise just how much energy was used or how exhausting [arrhythmia] could be - it just took my breath away and left me wrung out with hardly a breath left! I almost hurt. But then again, when you played your last piece it was just like heaving a big sigh, sitting back and coming home. Wonderful. Thank you so much for such an unexpected hour.”    ~ Joan Manning, Patient and Public Involvement** volunteer

"... we were treated to a talk by Professor Lambiase  about the fascinating work he and his team [were] doing on the heart and the electrical signals he was now able to map using his 'vest'  and he had some excellent graphics to show us.

The music was played by Elaine Chew and to call her maestra of the piano is not sufficient to describe her wonderful performance. The last piece she played was spellbinding containing as it did the most powerful rendition I have experienced in live performance followed by the most gentle, delicate finale. It made me realise that I had not been to enough live performances ..."    ~ Ronald Collins, Patient and Public Involvement volunteer

**Patient and Public Involvement is a program in the UK for involving patients and the public in the design and review of certain parts of clinical studies.