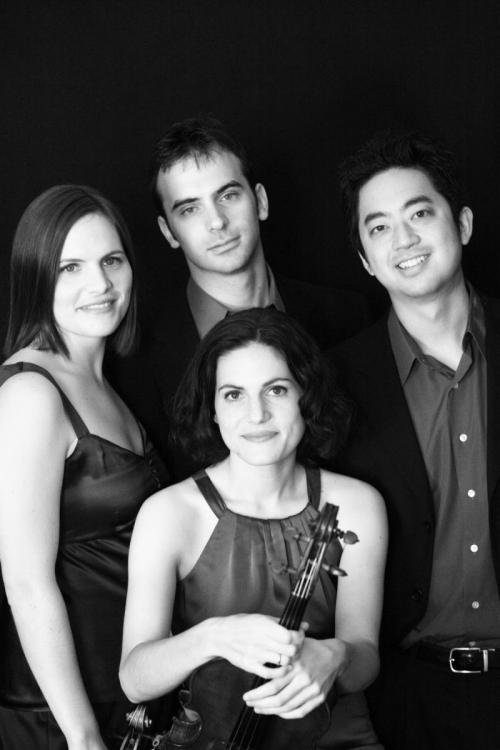 About the Jupiter Quartet:

The Jupiter String Quartet is a particularly intimate group, consisting of violinists Nelson Lee and Megan Freivogel, violist Liz Freivogel (older sister of Meg), and cellist Daniel McDonough (husband of Meg, brother-in-law of Liz). As they enter their thirteenth year of making music together, the members of this tightly-knit ensemble have firmly established their quartet as an important voice in the world of chamber music. In addition to their performing career, the Jupiters are the String Quartet-in-Residence at the University of Illinois in Champaign-Urbana, where they maintain private studios as well as responsibility for running the chamber music program.

The Jupiters have been fortunate to receive several chamber music honors over the course of their career. In 2008 they were awarded an Avery Fisher Career Grant and, in 2007, they were given the Cleveland Quartet Award from Chamber Music America. Previously, the Jupiters were awarded first prize in the Banff International String Quartet Competition (where they also received the Szekely Prize for best performance of a Beethoven quartet), and grand prize in the Fischoff National Chamber Music Competition. The quartet’s career began to take off after being selected in the Young Concert Artists International auditions in 2005. From 2007-2010, the Quartet was in residence at the Chamber Music Society of Lincoln Center’s Chamber Music Two and, in 2009, they received a grant from the Fromm Foundation to commission a new quartet from Dan Visconti for a CMSLC performance at Alice Tully Hall.

The Jupiters’ relationship with CMSLC continued with a series of performances alongside vocalist Thomas Hampson, including a new commission for quartet and voice by Mark Adamo. The quartet also helped to commission a new quartet by the composer Hannah Lash, which they premiered at the Great Lakes and Aspen Music Festivals.  Current projects include a second Beethoven cycle, this time at the Massachusetts Institute of Technology, a Bartok cycle (to premiere at the University of Illinois) and two upcoming recording projects, the first of which will include Visconti’s string quartet as well as the Dvorak “American” quartet–interspersed with a selection of spirituals arranged for voice and quartet. The Jupiters just finished a multi-year visiting residency at the Oberlin Conservatory, and will continue their regular series of concerts as resident quartet at the beautiful Krannert Performing Arts Center in Champaign-Urbana.

In addition to its formal concert schedule, the Jupiter String Quartet places a strong emphasis on developing relationships with future classical music audiences through outreach work in school systems and other educational performances. They believe that chamber music, because of the intensity of its interplay and communication, is one of the most effective ways of spreading an enthusiasm for “classical” music to new audiences.

Indeed, it was early exposure to chamber music that brought these four musicians to form the Jupiter String Quartet. Meg and Liz grew up playing string quartets with their two brothers, Ben and J. Rehearsals were often quite raucous, but they grew to love chamber music during weekly coachings with Oliver Edel, a wonderful cellist who taught generations of students in the Washington, D.C. area. Nelson also comes from a musical family–both of his parents are pianists (his father also conducts) and his twin sisters, Alicia and Andrea, are both musicians. Although Daniel originally wanted to be a violinist, he ended up on the cello because the organizers of his first string program declared that he had “better hands for the cello.” He remains skeptical of this comment (he was, after all, only five), but is happy that he ended up where he did.

The quartet has recorded works by Mendelssohn, Beethoven, Shostakovich, and Britten for Marquis Records. American works by Barber, Seeger, and Gershwin were also recorded for iTunes in conjunction with the Chamber Music Society of Lincoln Center and Deutsche Grammophon. Most recently, they collaborated on a collection of works by Ravel (Ravel: Intimate Masterpieces) on the Oberlin College label. Two upcoming recordings are in the works on the Azica label this season.

The quartet chose its name because Jupiter was the most prominent planet in the night sky at the time of its formation and the astrological symbol for Jupiter resembles the number four. They are also proud to list among their accomplishments in recent years the addition of five quartet children–Pablo (5), Lillian (2), Clara (2), Dominic (0), and Felix (0). You may spot some of these miniature Jupiters in the audience or tagging along to rehearsals, along with their grandparent babysitters.