Acclaimed composer and bandleader Mark Harvey, Senior Lecturer in Music at MIT, will celebrate the release of his legendary Aardvark Jazz Orchestra’s latest CD, Faces of Souls, in a livestream interview with distinguished jazz writer and historian Bob Blumenthal on Sunday, November 15, 2020, at 7 pm EST. Harvey and Blumenthal will play excerpts from the new album, a striking collection of Harvey’s original compositions on themes of social justice and democracy, with urgent relevance in our tumultuous times.  Faces of Souls is Aardvark’s 16th CD and the band’s 10th release on Leo Records, one of the world’s leading independent labels.

“One of the best jazz ensembles in the world” – Jazz Podium, Germany

“Mark Harvey has an uncanny mastery for balancing and opposing orchestral masses, and he daringly creates unusual associations and complex rhythms. His orchestra “rings,” the nuances stand out, the colors vibrate, the power is expressed fully.”  – Jean Buzelin (CultureJazz.Fr)

THE NEW CD - Faces of Souls

Faces of Souls takes listeners on a captivating journey through seven of Harvey’s masterful compositions, from poignant elegies to sweeping orchestral masterpieces that weave complex tapestries of harmonies, rhythms, colors and textures.  Harvey’s brilliant cast of musicians, many with 30+ years on the Aardvark bandstand, shine equally in consummate section work and inspired solos.

The title track, Faces of Souls, takes its inspiration from the Shaw Memorial in Boston, Augustus Saint-Gaudens’ powerful sculpture of Colonel Robert Gould Shaw and his 54th Massachusetts Regiment, who were among the first African Americans to fight in the Civil War.  A companion piece, Consecration, also evokes the Shaw Memorial.  Other works expand on the album’s themes of justice and democracy.

Purchase the Faces of Souls CD today!  Click the link below! 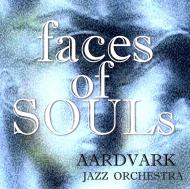