A Catalog of Birds 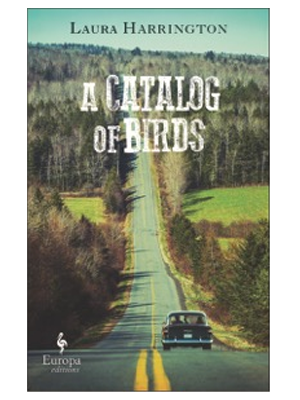 “There is a fierceness to this book, the rare courage of clear vision and unadorned expression. Every word, every syllable, is vital as Harrington weaves a mesmerizing tale. Touching, heartening, suffused with wisdom, A Catalog of Birds is an absolute marvel of a novel.”   Robin Black, author of Life Drawing

Set in 1970, a watershed moment in American history, A Catalog of Birds tells the story of the Flynn family and the devastating impact of the Vietnam War. At the heart of the novel is the relationship between siblings Nell and Billy Flynn. Nell excels academically and is headed to college and a career in science. Billy, a passionate artist, enlists as a pilot to fulfill his lifelong dream of flying.  The only survivor when his helicopter is shot down, he returns home so seriously wounded he may never use his right hand again. As Billy struggles to regain the life he once had, Nell and their family will have to do all that’s possible to save him.

“Taut and true, A Catalog of Birds is a beautiful book about family, loss and love. Its memorable characters will haunt you long after you put it down.”
Claire Messud, award-winning author of The Woman Upstairs

6:30 Supper with the Authors

The Bookshop of Beverly Farms

About Laura Harrington
Laura Harrington, award winning playwright, lyricist and librettist, winner of the 2008 Kleban Award for “most promising librettist in American Musical Theatre,” has written dozens of plays, musicals, operas and radio plays which have been produced in 28 states, Canada and Europe, in venues ranging from Off-Broadway to Houston Grand Opera to the Paris Cinemateque. Harrington has twice won both the Massachusetts Cultural Council Award in playwriting and the Clauder Competition for best new play in New England.  Additional awards include a Boston IRNE (Independent Reviewers of New England) Award for Best New Play, a Bunting Institute Fellowship at Harvard/ Radcliffe, a Whiting Foundation Grant-in-Aid, a New Orleans’ “Big Easy” Award, the Joseph Kesselring Award for Drama, a New England Emmy, a Quebec Cinemateque Award, as well as grants from the NEA, Opera America, the Pilgrim Project, the Canada Council, etc.

Laura was awarded the 2009 Levitan Prize at MIT for Excellence in Teaching.  She has also been a frequent guest artist at Tufts, Wellesley, Skidmore, the University of Iowa, and Harvard where she was a Briggs-Copeland Fellow.  She was the 2014 Jack Kerouac Writer in Residence at UMASS Lowell.

She occasionally steps into the classical music world, having written a choral cantata with composer Roger Ames, Let There Be Joy, based on a poem by Kim Garcia, and The Song of the Silkie, a chamber work for string quartet and baritone, written with composer Elena Ruehr.

Current projects include a commission from Playwrights Horizons to create Alice Bliss, the musical, with composer Jenny Giering and lyricist Adam Gwon. A workshop of the musical will take place in 2017 in NYC, with Mark Brokaw directing. She is writing a piece for orchestra, chorus and two soloists with composer Roger Ames, based on yet another version of the Silkie myth, and is in the planning stages for a revival of The Perfect 36 for the 100th Anniversary of the passage of the 19th Amendment.

Laura’s debut novel, Alice Bliss (Viking/ Penguin) won the 2012 Massachusetts Book Award in Fiction, was nominated for the ALEX Award, was a "People Pick" with 4 out of 4 stars, was chosen as "The Best Books of the Summer" by Entertainment Weekly, and was selected for the Barnes & Noble "Discover Great New Writers" program. School Library Journal and a dozen other bloggers named Alice Bliss to their “Best Books of 2011” list. Alice Bliss has also been published in the UK, Italy and Denmark.