The MTA community is saddened to hear of the passing of retired Senior Lecturer of Music, John Oliver. John was responsible for forming the MIT Concert Choir in 1989 and founded the Tanglewood Festival Chorus in 1970. During his time at MIT, John also conducted the MIT Glee Club, Choral Society, and Chamber Chorus. His musical contributions will be missed by all.

In this article we share the memories of Music and Theater Arts faculty members. More will be added as we receive them.

"In the beginning, I was interested in precision more than in anything else; precision is a fault of youth. By now, habits of precision are built into the work of the chorus, and I have a much bigger vocabulary to use in asking for colors, textures, atmospheres, different ways to phrase,’’ he said. “These things are more important than precision, and they can help lead us into what the music means, what it is about. In our very best performances, I feel, we transcend choral singing and become more like a Lieder singer exploring the union of poetry and music.” John Oliver

I first met John in the last 1980’s.  I was the pianist for the Boston University Young Artists Chorus at Tanglewood and John had been invited to do a rehearsal with the chorus.  It happened that John needed a pianist for the MIT choirs and after hearing me play for his rehearsal he invited me to audition for the position.  I didn’t know much about John or about the fact that MIT had choral singing but was grateful to have the offer and after some sight reading and some solo playing John offered me the job.
I’ll never forget our first rehearsal with the MIT Concert Choir.  John had chosen a rarely performed work of Vaughan Williams entitled “Tudor Portraits”.   The rehearsal began with the customary vocal warmups and then we launched into the Vaughan Williams reading it practically without interruption from start to finish!  i was flabbergasted by this approach and by the fact that the choir - frequently stumbling - still held on for dear life and managed to get through the piece!  He later explained to me how important it was for the choir to have a sense of the whole piece from their very first exposure to its many beauties and complexities.  This was lesson one.
The incredibly intense pace did not let up in the second rehearsal and I found myself floundering as much as the chorus…even though we focused primarily on the first few movements.  Part of my messy playing was from total intimidation as I witnessed John’s mastery of every element of the score (including…when I was totally screwing up the piano part…he would run to the piano and play it flawlessly!!)  Lesson two was KNOW THE SCORE.
I was sure that the pace would slacken by rehearsal number three thinking that John would begin to focus on more detail of dynamics and articulation in one or two movements.  Wrong again.  As I later learned, John taught me the importance of securing all of the pitches and rhythms first before asking for any other details….otherwise, you frustrate both the singers and YOURSELF!!   So the whirlwind pace continued in rehearsal number three and I was still struggling to support the choir with my playing.  John took me aside at the concluding of this rehearsal and warned me that “if this doesn’t get better, I’ll have to find someone else.”   Needless to say, I went home that evening and practiced the piano part until my fingers bled.
Thankfully, John kept me as his pianist for the next ten or so years until his retirement.  I applied the position and have never been more grateful for the many lessons I learned as his pianist and also as his assistant with the Tanglewood Festival Chorus ( a position he offered me soon after he left MIT)
John was a musician’s musician.  He truly adored all kinds of music but was especially fond of the singing voice and of the power of text and poetry when it is married with music.  He will be missed by so many who loved and admired his passion for people, music, good food, good wine, and good friends. 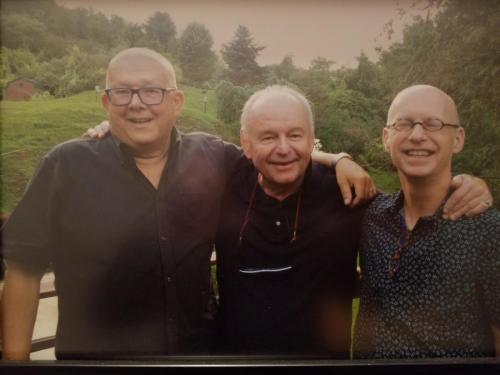 Insitute Professor Marcus Thompson shares his memories of John:
To this day I cannot attend a Boston Symphony Orchestra concert that includes the Tanglewood Festival Chorus without seeing and hearing the living legacy of John Oliver. There are more than two generations of my former MIT students still singing with TFC! (And one of my mother’s former elementary school students, too!) As a co-founder of the TFC, he recruited and trained so many of the best and brightest from throughout the region and more than a few from MIT, where he was Director of the Concert Choir by the the time I arrived. As a young man he had been selected to follow Klaus Liepmann, founder of Music at MIT, as the new Director of the Concert Choir–our own internal oratorio society. In those days Concert Choir was a community-wide effort drawing from all corners of MIT, and announcing its performances with orchestra in colorful posters placed throughout the Institute by devoted followers. Sometimes its repertoire and audience could not be contained in Kresge, and needed to move to local churches and even to Jordan Hall. He also started MIT Chamber Chorus, our Vocal Repertoire and Performance class, and helped audition and place our students with teachers for the emerging Emerson program. In my earliest years at MIT John and I were also part of the team that taught the large enrollment in Introduction to Music, discussing what book we would use and how much we needed to cover each semester. I will always remember with pleasure the sound of the John Oliver Chorale at First Church in Harvard Square, and the amazement and pride at first noticing one hundred TFC singers filing on stage to premiere a major work with the BSO without scores!
Institute Professor John Harbison shares his memories of John:
John Oliver revitalized the whole concept of a Symphony chorus when he proposed that the Tanglewood Festival Choir sing entirely from memory.   This had so many consequences:  the hours of preparation cause a special spirit to take hold, a reliance on each other, and  a sense of going to battle having paid an unusual and generally rewarding price.   Among the many performances they achieved during those many years I remember especially the Berlioz Trojans , and Mahler Symphony 2, both distinguished by the dramatic involvement of the chorus, free of the book and as flexible as fine operatic singers. It was my pleasure to work with John on my Requiem, and later on a choral scherzo, Koussevitsy Said, both of which he rehearsed with what had become a kind of magic shorthand, after his many years with a  high-continuity group.  A special pleasure was the company of the chorus members, who were always so engaged by their participation, the tough  preparation, the travel, the rapid turnover of repertoire, that it was a continuous high for them, something they knew they owed to him.

I joined John Oliver’s Tanglewood Festival Chorus in 2006. Having recently graduated from MIT, where I sang in the Chamber Chorus, I auditioned for the TFC to simply keep up a musical hobby. Little did I know that John Oliver would change my life.

Although I spent my entire childhood training to be a pianist, including three years in the Juilliard Pre-College program, by my undergraduate years I had no intention of pursuing a professional music career. During my years in the TFC, however, I finally fell in love with music.

A master pedagogue, John had a gift for inspiring vocal technique by evoking musical ideas and intent, all with a generous dose of wit. He had great pride in the varied backgrounds of his chorus members and allowed our lives and occupations outside the chorus to color our voices within. Sharing an almost-psychic connection with my fellow singers, I experienced performing from memory neither as a feat nor a requirement, but truly “by heart.”

John took a particular interest in my singing, and over the years I performed several small solos at Symphony Hall and Tanglewood. In later years, he invited me to serve as the chorus’ rehearsal pianist as well. Because John believed in me as a musician, I began to believe in myself as a musician. In 2010, I quit my corporate job to become a full-time pianist.

Beyond inspiring a new career, John demonstrated the ability of music to create community. As he wrote to the chorus when he announced his retirement, “It is the music that binds everyone together in [the chorus] room, those who otherwise might not be bound together. Maybe we need more music in this increasingly brutal and awful world…” By teaching the next generation of musicians, I aspire to honor John’s legacy with more music and, hopefully, more peace.