Dewa Alit is a Visiting Artist with Gamelan Galak Tika during the spring semester. 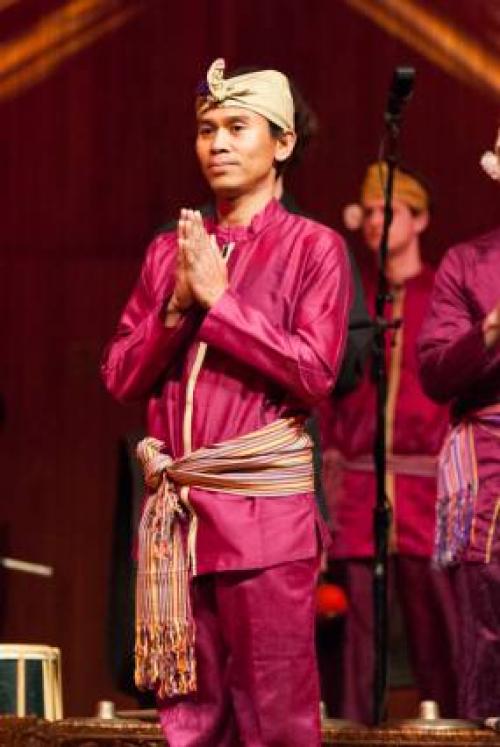 Born in 1973 to a family of artists in Pengosekan village in Bali, Dewa Ketut Alit was immersed in Balinese gamelan from early childhood. His father Dewa Nyoman Sura and his oldest brother Dewa Putu Berata were the most influential teachers in his life. He began performing at age 11, and by age 13 was playing ugal (leading instrument) in his village’s adult group, Tunas Mekar Pengosekan. 1988-1995 he played in the internationally acclaimed Gamelan Semara Ratih of Ubud village, touring internationally.

In 1997, a year before graduating from Academy of Indonesian Performing Arts in Denpasar (STSI Denpasar), Dewa Alit and his brothers founded Çudamani. The group immidiately acknowledged as one of the best gamelan group both locally and internationally and went on their own international tours.

Dewa Alit is generally acknowledged as the leading composer of his generation in Bali. His “Geregel” (2000) was influential both in Bali and abroad, and was the subject of a 50 page analysis in the “Perspectives on New Music”.  One of his compositions written for a Boston-base gamelan group Galak Tika, “Semara Wisaya” was performed at New York Carnegie in 2004 and another composition “Pelog Slendro” appeared at Bang on a Marathon in June 2006. He also writes music for non-gamelan ensambles such as MIT's Gamelan Electrika and Talujon Percussion, USA.

As a collaborator, Dewa Alit has worked with musicians and dancers from around the world. These include his own compositions using Balinese and western instruments, a dance-opera with a Chinese dance company in 2001, contemporary theater production “Buddha 12” directed by Alicia Arata Kitamura (Theatre Annees Folles, Tokyo) in 2007, a collaboration with a butoh dancer Ko Murobushi in Asia Tri Jogya Festival, Jogyakarta, in 2008, and most recently a 3-men performance "Hagoromo" with Japan's most aknowledged contemporary dancer Kaiji Moriyama and Noh master Reijiro Tsumura at Tokyo National Theatre in 2014.  Dewa Alit was a gamelan director for Evan Ziporyn’s new opera “A House in Bali,” performing its premiere with world famous Bang On a Can Allstars in Bali and at Cal Performances, USA, in 2009, and Boston-New York in October 2010.

He is regularly invited to teach and compose for gamelan outside Bali, which includes Gamelan Gita Asmara at University of British Colombia, Gamelan Galak Tika at Massachusetts Institute of Technology, Helena College in Perth, and Gamelan SingaMurti in Singapore.

Seeking a wider path for expressing his approach to new music in gamalen, Dewa Alit founded his own gamelan group in 2007, Gamelan Salukat, performing on a new set of instruments of Alit’s own tuning and design.