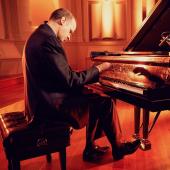 Doug Johnson is a pianist and an educator and is Associate Professor of Piano at Berklee College of Music in Boston.

Doug is a Licensed Andover Educator (Body Mapping Certification) and a founding member of the Berklee Performance Wellness Institute. He earned his Masters degree in Music from the New England Conservatory.