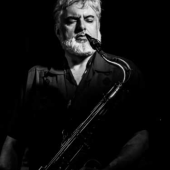 In his two decades as an integral member of the thriving improvised music community of New York City, saxophonist and composer Tony Malaby has emerged as a wholly unique and singular voice. Malaby was recently named one of Downbeat's "80 Coolest Things in Jazz", saying that, "[Malaby] is a formidably accomplished soprano and tenor saxophonist with enviable tone and an endless font of compelling ideas, yet he steers his music away from perfection," and that "his considerable gifts as a melodist tend to sneak up on you." Jazztimes added that Malaby is, "a hero of today's improvised music scene". This outpour of praise is unsurprising given the number of projects which Malaby has been involved with since his arrival in New York in the early-1990s. In recent years, Malaby has led and recorded many of his own projects--his Tamarindo Trio with Nasheet Waits and William Parker, TubaCello with John Hollenbeck, Chris Hoffman and Dan Peck ,Palomo Recio with Ben Monder, Eivind Opsvik, and Nasheet Waits and the improvising trio with Angelica Sanchez and Tom Rainey. Malaby is also a stalwart sideman, and has lent his talents to such groups as the Paul Motian Electric Be-Bop Band, Charlie Haden's Liberation Music Orchestra, Fred Hersch's Quintet and Walt Whitman Project, Mark Helias' Open Loose,Chris Lightcap's Bigmouth, Eivind Opsvik's Overseas , Ches Smith's These Arches , Michael Formanek's Elusion Quartet and Kris Davis' Diatom Ribbons Quintet.