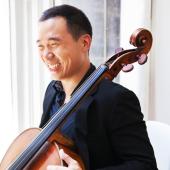 A native of Seoul, Korea, cellist Kee-Hyun Kim has been praised for his "assertive style...and vital musical spirit." (Pittsburgh Tribune) On faculty at Harvard University’s Department of Music, he is a founding member of the Grammy Award-winning Parker Quartet, Blodgett Artists-in-Residence at Harvard since 2014. The quartet travels extensively around North America, Europe and Asia, and has recorded for ECM, Naxos, Innova, Zig Zag and Nimbus labels. Some awards and distinctions include 1st prize at the Bordeaux String Quartet competition, the Cleveland Quartet Award, and 2010's Grammy Award for "Best Chamber Music Performance.”

Mr. Kim has performed at festivals such as the Mostly Mozart, Kronberg, World Cello Congress III, Aspen, Kneisel Hall, Yellow Barn, and the Perlman Music Program. Recently he recorded three Mozart duos on the Opus Cello label with Blaise Dejardin, principal cellist of the Boston Symphony Orchestra. Kim dedicates much of his time to teaching - in addition to coaching chamber music ensembles, he maintains a small studio of cellists at Harvard, MIT and privately, and has served as adjunct faculty of cello at the Phillips Exeter School and the University of St. Thomas (MN). He has given masterclasses at the New England Conservatory, University of South Carolina, Bowdoin Festival, and the Garth Newel Music Festival, among others, and is a frequent guest on CelloBello’s Cellochats.

Mr. Kim started his musical education very early on, starting at the Juilliard pre-college in 1992. Since then, he has attended the preparatory divisions of the Korean National University of the Arts, where he studied with Myung-Wha Chung; the New England Conservatory, and the Walnut Hill School. He holds a B.M. from the New England Conservatory, as well as two M.M. from the same institution, where his principal teachers were Laurence Lesser and Paul Katz.

Kee plays on an 1844 Giaccomo Rivolta cello made in Milan, as well as a custom-made bow from Benoit Rolland, made in 2007. He lives in Arlington, MA, with his wife, young daughter and two cats.