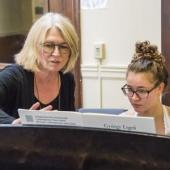 Marilyn Roth is a graduate of the New England Conservatory of Music, Boston, where she received the Master of Music in Piano Performance, studying with Victor Rosenbaum. She also holds the Bachelor of Fine Arts in Music Education from Carnegie Mellon University in Pittsburgh, Pennsylvania, where her principal piano teacher was Harry Franklin who himself was a student of Alexander Siloti. Roth was raised in Pittsburgh where she won first prize in the Three Rivers Piano Competition and made her orchestral debut with the Pittsburgh Symphony Orchestra. As an oboist, she played in a woodwind quintet coached by Philip Glass.

Since 1985 Marilyn Roth has been on the piano faculty of the NEC Preparatory School, where in 1997 she was appointed Co-Chairman of the piano department and is currently the Chair of the department, a position she has held since 2002. In 2007 Roth received the prestigious Jean Stackhouse Excellence in Teaching Award from her colleagues. At NEC she has also taught Eurythmics, and has co-directed Summer Piano Pedagogy Institutes and Summer Piano Institutes. She was twice invited to present at the World Piano Pedagogy Conference as a member of the Committee on Theories and Learning. She regularly gives presentations to piano teachers' associations and piano pedagogy classes at NEC, Boston Conservatory of Music, and the Longy School of Music.

Marilyn Roth's class includes young beginners as well as advanced high school students. Her current and former students have performed on National Public Radio's From the Top program, and have been winners in the concerto competitions of the Boston Symphony, the Pro Arte Orchestra of Boston, and the NEC Preparatory School. Her students have also won prizes in solo competitions, among them the New England Piano Teachers' Association, Rivera, Ithaca College, New York International, and the Chopin International Competitions. Since 2006 she has directed seven performing tours that have taken NEC Prep pianists to Budapest, Nohant, Leipzig, Paris, Vienna, and Weimar.

Roth is currently an Affiliated Artist at the Massachusetts Institute of Technology, where she teaches in the Emerson/Harris Program for Private Study. Formerly she was on the faculty of the University of Massachusetts Lowell, and the International Institute for Young Musicians at the University of Kansas. In 2015, Marilyn Roth was on the jury of the 2nd Hans von Bülow International Piano Competition, in Meiningen, Germany.