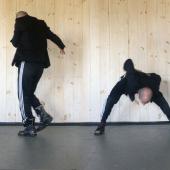 Dan Safer is the Artistic Director of dance/theater company  Witness Relocation (www.witnessrelocation.org) and has directed/ choreographed all of their shows, ranging from fully scripted plays (including world premieres by Chuck Mee, and an English language premiere by Toshiki Okada) to original dance/theater pieces, to many things in between, all over the place, from the back rooms of bars in NYC to Théâtre National de Chaillot in Paris to a giant leaky warehouse at a dance festival in Poland where a light fell off the grid halfway thru a show and almost killed him. WR is a resident company at LaMama in NYC. Dan recently choreographed “Jedermann”, at the Salzburg Festival in Austria. His work has been at Brooklyn Academy of Music, Dance Theater Workshop, Danspace, Les Subsistances (Lyon, France), and many other places. In 2011, he choreographed Stravinsky's RITE OF SPRING for Philadelphia Orchestra with Obie-winners Ridge Theater. Artforum Magazine called him "pure expressionistic danger" and Time Out NY called him "a purveyor of lo-fi mayhem.” He has choreographed plays, fashion shows, operas, music videos, films, flash mobs and more, got kicked out of high school for a year, used to be a go-go dancer, and once choreographed the Queen of Thailand’s Birthday Party. Dan taught at NYU for almost two decades and is now faculty at MIT.