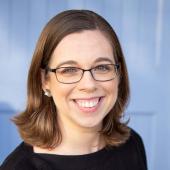 Emily Richmond Pollock is an Associate Professor of Music. A native Oregonian, Pollock was first trained as an oboist and composer and earned her Bachelor of Arts in Music from Harvard College in 2006. She subsequently earned her M.A. (2008) and Ph.D. (2012) in music history and literature from the University of California, Berkeley. Her book, Opera after the Zero Hour: The Problem of Tradition and the Possibility of Renewal in Postwar West Germany, was published by Oxford University Press in 2019. It is focused on the aesthetics of new opera composition in West Germany while attending to questions of institutional history, reception, and architecture as they pertain to the post-war reconstruction of operatic life. Archival research for the project in Stuttgart, Berlin, Basel, Munich, Mainz, and Kassel was supported by fellowships from the German Academic Exchange Service (DAAD), the Paul Sacher Stiftung, and the Class of 1947 at MIT. Pollock’s other published work includes “Pride of Place: The 1963 Rebuilding of the Munich Nationaltheater,” in Dreams of Germany: Musical Imaginaries from the Concert Hall to the Dance Floor, ed. Tom Irvine and Neil Gregor (Berghahn Books, 2018); “Opera by the Book: Defining Music Theater in the Third Reich,” in the Journal of Musicology (2018), which was awarded the Kurt Weill Prize for distinguished scholarship in music theater since 1900; and an article on Bernd Alois Zimmermann's 1965 opera Die Soldaten, published in the 2014 Opera Quarterly issue “Opera and the Avant-Garde.”

Pollock’s research focuses on opera from the bel canto era to the present. Methodologically, she has focused particularly on conservatism, the historicization and politics of modernist aesthetic value, music institutions, the relationship between modernism and convention, and a critical reappraisal of source studies. Her current research project, “Opera on Uncommon Ground,” is a fieldwork-based investigation of the institutional history and aesthetics of five American opera festivals.

Venues at which Pollock has presented her research include the University of Music and Performing Arts Graz, University of California, Berkeley, Université Toulouse - Jean Jaurès, Boston University, Brandeis, Ohio State University, CUNY, and Harvard; the German Studies Association (2012, 2013, 2019), the International Conference on Music Since 1900 (2011, 2013), and the national meeting of the American Musicological Society (2010, 2013, 2015, 2017, 2019); topics conferences on new music, Germany, the middlebrow, opera, music and the written word, music notation, Giuseppe Verdi, voice and affect, and electroacoustic music; and at symposia in Basel, Dresden, and Graz. With Anicia Timberlake, she organized an international conference in September 2011 on the topic of Music in Divided Germany. In 2020, she co-organized an international conference on Music Festival Studies. Pollock has also published several book reviews and a review essay of the 2006 stagings of Mozart’s comic operas in Salzburg.

Pollock joined Music and Theater Arts in 2012 and teaches 21M.011 Introduction to Western Music and courses on opera, the twentieth century, and the symphonic repertoire. She is currently the music major advisor and has served in the past as a Burchard Faculty Fellow and as an advisor to freshmen and music concentrators. She remains an active amateur oboist, performing with the Cambridge Symphony Orchestra and the Mercury Orchestra.