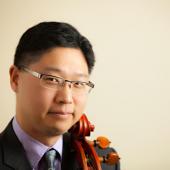 Cellist Eugene Kim has enjoyed a distinguished teaching career. He is the 2019 recipient of the Jean Stackhouse Award for Excellence in Teaching at the Preparatory Division of New England Conservatory. His students have performed concerti with the Boston Symphony (under Andris Nelsons), the Boston Pops (under Keith Lockhart), the NEC Youth Philharmonic and Youth Symphony Orchestras, the Boston Philharmonic Youth Orchestra, the New England Philharmonic, as well as numerous other Boston area orchestras. Eugene’s students have been top prize-winners of several national competitions, including the Sphinx Competition, and have performed on the national radio show, From the Top. His cello students have gained acceptance to the major US conservatories, including the Juilliard School, New England Conservatory, the Eastman School of Music, the Peabody Institute, the Shepherd School (Rice) and Jacobs School of Music (Indiana University).

An avid chamber musician and solo recitalist, cellist Eugene has given solo performances throughout Korea, England, Italy, and his native United States, including such venues as Carnegie Recital Hall and Jordan Hall. His chamber music collaborations have included Raphael Hillyer, Shmuel Ashkenasi, Marcus Thompson, Gervase de Peyer, and Mark O'Connor. An active Boston-area performer, he has performed with the Boston Symphony Orchestra as an extra player, as well as the Boston Pops Esplanade Orchestra, Boston Ballet, Boston Lyric Opera and the Boston Landmarks Orchestra. Eugene has been guest principal cellist with the Boston Philharmonic, Boston Classical Orchestra and the Pro Arte Chamber Ensemble. Formerly, he was the principal cellist of the Vermont Symphony.