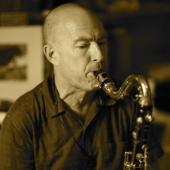 Evan Ziporyn is a composer/clarinetist who has forged an international reputation through his genre-defying, cross-cultural works and performances.  At MIT he is Inaugural Director of the Center for Art, Science and Technology (CAST), founder and Artistic Director of Gamelan Galak Tika, and curator of the MIT Sounding performance series.

His music has been commissioned and performed by Yo-yo Ma’s Silkroad Ensemble, Brooklyn Rider, Maya Beiser, Roomful of Teeth, Bang on a Can, Kronos Quartet, Wu Man, the American Composers Orchestra, Sentieri Selvaggi, the American Repertory Theater, Steven Schick, So Percussion, Gamelan Sekar Jaya, Sarah Cahill, and the Boston Modern Orchestra Project.  They have been presented at international venues including Lincoln Center, Carnegie Hall, London’s Barbican Center, the Holland Festival, the Singapore Festival, the Sydney Olympics, and the Bali International Arts Festival.  His opera A House in Bali (directed by MIT colleague Jay Scheib) was featured at BAM Next Wave in 2010; that same fall his works were featured at a Carnegie Hall Zankel Making Music composer’s portrait concert.

Ziporyn tours and records regularly as a soloist and as a member of Eviyan (with Iva Bittova and Gyan Riley).  From 1992-2012 he was a founding member of the Bang on a Can All-stars (Musical America’s 2005 Ensemble of the Air), finishing his tenure with the group with an appearance on an episode of PBS’ Arthur.  His long-time work with the Steve Reich Ensemble led to sharing a 1999 Grammy for Best Chamber Performance for their recording of Music for 18 Musicians.  He is also the featured multi-tracked soloist on Reich’s Nonesuch recording of New York Counterpoint.  Other awards include a 2012 Massachusetts Arts Council Fellowship, the 2007 USArtists Walker Award and the 2004 American Academy of Arts and Letters Goddard Lieberson Fellowship.

Recent projects include In My Mind & In My Car (w/Christine Southworth), an hour-length work for bass clarinet and electronics, which he has performed at festivals in the US, Canada, Belgium, Poland, and Indonesia; compositions and arrangements for Ken Burns’ upcoming Vietnam documentary, arrangements for Silkroad Ensemble’s most recent CD, Sing Me Home.  This past year he released a new Eviyan CD, as well as CDs of collaborations with DuoJalal, Czech composer Beata Hlavenkova, and Polish jazz masters Waclaw Zimpel and Hubert Zempel.  Additionally, his performance with the MIT Wind Ensemble of Don Byron’s Clarinet Concerto, commissioned by MIT, and released on Sunnyside Records, received a 5-star Downbeat review.