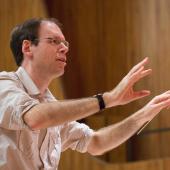 Dr. Frederick Harris, Jr. is the Director of Wind and Jazz Ensembles at MIT, where he serves as Music Director of the MIT Wind Ensemble, MIT Festival Jazz Ensemble, and Jazz Coordinator, overseeing jazz chamber music programs including three combos, MIT Vocal Jazz Ensemble, and the Emerson Jazz Scholars Program. Harris is also the creator and director of It Must Be Now!, a project creating music and visual art on themes of racial justice. He is alsoleading a project combing Brazilian music and environmental research, focused on the Amazon rainforest.

Harris has been highly active with public school students and music educators throughout his career, leading seminars, guest conducting, and coordinating enrichment events at MIT and beyond. Nominated by his students, Harris is a 2013 and 2019 recipient of the James A. and Ruth Levitan Award for Excellence in Teaching in the School of Humanities, Arts, and Social Sciences at MIT.

He is the author of Conducting with Feeling and Seeking the Infinite: The Musical Life of Stanisław Skrowaczewski, and currently he is writing a biography of Herb Pomeroy. He has published articles/book chapters related to conducting, jazz, and wind ensemble performance.

The joint MIT Wind Ensemble and MIT Festival Jazz Ensemble recording Infinite Windson Sunnyside Records, was awarded the highest rating by Down beat magazine (5 stars), and was chosen as one of Down beat magazine’s “Best Albums of 2015: Masterpieces.” Both of these honors are firsts in MIT’s history. It is extremely rare that student ensembles are mentioned in Down beat’s highly selective “best of the year” list. The Boston Globe called Infinite Winds “one of the most compelling CDs of the year.” Other recordings by the MIT Wind Ensemble include Waking Winds(2004), published by Innova Recordings of the American Composers, and Solo Eclipse(2008), published by Albany Records. Both CDs feature premiere recordings by composers Schuller, Child, Ziporyn, Klein, and Amis. Dr. Harris conducted Kenny Werner’s No Beginning, No End(2010)—originally premiered by MITWE—in New York City for Half Note Records.

Throughout its 22-year history, MITWE has collaborated with elementary, middle and high school students throughout Massachusetts. It has collaborated extensively with many of MIT’s ensembles and faculty members. In March of 2019, MITWE embarked on its first tour, spending a week in the Dominican Republic, presenting four concerts,including a performance with clarinetist Anat Cohen, many STEM presentations for middle, high school and college students, and leading music workshops. In January of 2019 the MIT Festival Jazz Ensemble participated in a cultural exchange, touring Puerto Rico with Miguel Zenón, presenting concerts in various venues and also STEM workshops in middle and high schools.

Harris has served as acting music director of the MIT Symphony Orchestra, assistant conductor of the Boston University Tanglewood Institute Young Artists Wind Ensemble, music director of the Summer Music Festival at the South Shore Conservatory, conductor of the Concerto Grosso Orchestra at the University of Minnesota, and he has guest conducted the New Hampshire Philharmonic and the Chamber Music Society of Minnesota, and for numerous wind and jazz festivals for the Massachusetts, New Hampshire, and Maine Music Educators Association.

He also has appeared on Minnesota Public Radio's All Things Considered and other MPR programs. In 2015 he produced and premiered a 30-minute documentary film Seeking the Infinite: Stanislaw Skrowaczewski—A Life in Music, at Orchestra Hall, Minneapolis, Minnesota. Over 600 people viewed the film and it was reviewed as “essentially viewing” by Minnesota Public Radio. Dr. Harris organized a commission consortium involving three composers and 40 universities/schools honoring the 85th birthday of legendary wind conductor Frank Battisti. The project is sponsored by the American Composers Forum. He has lectured on music in Canada and at many New England universities, as well as for the Minnesota Orchestra and the Deutsche Radio Philharmonie Saarbrücken.

Harris has performed as a drummer with the Aardvark Jazz Orchestra, John Harbison, the Boston Pops, Kenny Werner,and Grammy-winning jazz saxophonist Joe Lovano. He studied jazz drums with Alan Dawson and classical percussion with Arthur Press, former principal percussionist with the Boston Symphony Orchestra. As a classical percussionist he has performed with wind ensembles, orchestras, and chamber ensembles throughout New England.

Harris was awarded the 2010 Paul Smith Hall of Fame Award from the Massachusetts Instrumental and Choral Conductors Association. The award is presented annually “to a Massachusetts music conductor who is a musical and personal inspiration to students, the community, and other professional conductors.