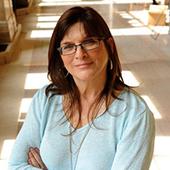 Professor of Theater Arts, Janet Sonenberg has directed theater in the United States, South America and Europe, and has worked on films with Paddy Chayefsky,  Merchant/Ivory, among others. Her books, The Actor Speaks: Twenty-Four Actors Talk about Process and Technique and Dreamwork for Actors, focus on the acting process. In the latter, she describes a new creative technique in which actors and other artists avail themselves of direct access to their autonomous imaginations; this technique has been adopted by theater companies and professional theater schools around the world.  Along with other faculty members in Theater Arts, Sonenberg develops work with students that is eventually produced in the professional world. She commissioned a play created between MIT and the Royal Shakespeare Company of the UK, on which her students served as dramaturges and creators. The play, The Tragedy of Thomas Hobbes, opened the RSC’s 2008 London season at Wilton’s Music Hall.  Her current writing projects are a book on archetypes in acting, with a focus on acting in American film from 1930 to today, and a book of essays.