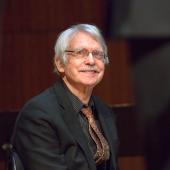 Composer John Harbison is among America's most distinguished artistic figures. The recipient of numerous awards and honors, among them a MacArthur and a Pulitzer, Harbison has composed music for most of America's premiere musical institutions, including the Metropolitan Opera, Chicago Symphony, Boston Symphony, New York Philharmonic, and the Chamber Music Society of Lincoln Center. His catalog includes three operas, six symphonies, twelve concerti, a ballet, five string quartets, numerous song cycles and chamber works, and a large body of sacred music that includes cantatas, motets, and the orchestral-choral works Four Psalms, Requiem and Abraham.  His music is widely recorded on leading labels.

In December Harbison’s opera The Great Gatsby received its European premiere at Semperoper Dresden, with a revival there planned for May 2017.  Gatsby has previously been heard in New York, Chicago, San Francisco, Aspen, Boston and Tanglewood.  Recent premieres include Seven Poems of Lorine Niedecker, String Trio, For Violin Alone, and Supper at Emmaus.  Harbison’s current composition projects include a work for cello and strings, a clarinet trio, Longfellow settings for viols and countertenor, his sixth string quartet, and a monodrama.

Harbison has been composer-in-residence with the Pittsburgh Symphony, the Los Angeles Philharmonic, the American Academy in Rome, and numerous festivals. He received degrees from Harvard and Princeton before joining the Massachusetts Institute of Technology, where he is currently Institute Professor. For many summers since 1984 he taught composition at Tanglewood, serving as head of the composition program there from 2005-2015, often also directing its Festival of Contemporary Music. With Rose Mary Harbison, the inspiration for many of his violin works,  he has been co-Artistic Director of the annual Token Creek Chamber Music Festival since it’s founding in 1989.  He continues as principal guest conductor at Emmanuel Music (where for three years he served as Acting Artistic Director). Active as a jazz pianist, Harbison founded MITs Vocal Jazz Ensemble in 2010, for which he served as coach and arranger, and he is pianist with the faculty jazz group Strength in Numbers (SIN).  In these roles he is adding to his large catalogue of pop-songs and jazz arrangements.