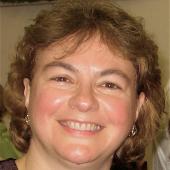 Karen Harvey enjoys a multi-faceted career as an accomplished pianist, composer and conductor.  She is a two-time recipient of fellowships to the Tanglewood Music Center, and has been a featured soloist with numerous New England orchestras.  While a member of the Griffin Music Ensemble, Ms. Harvey premiered dozens of chamber and solo compositions, including several written for her; describing her solo recital of twentieth century piano music at the Wang Center, Josiah Fisk of the Boston Herald wrote: “...brilliant work by pianist with an infinite supply of fingers.”

In demand as a collaborative artist, Ms. Harvey has appeared and made recordings with The Spectrum Singers, The Zamir Chorale, the Orpheus Singers, Chorus Pro Musica, andThe Cantata Singers, including a performance of Donald Sur’s Slavery Documents at Symphony Hall.  She has served as pianist for the Boston Pops Holiday Chorus and Boston Ballet Company, and has performed live on WGBH Radio.

Ms. Harvey is an Affiliate Artist at M.I.T., Music Director for the SRO Players of Lowell  and for several years directed the Holiday Chorus at Faneuil Hall Marketplace.  As Minister of Music at the United Church of Christ in Norwell since 1994, she directs five choirs of various ages in an active and growing ministry which includes mentoring amateur musicians, writing and arranging music for many occasions and producing Christmas concerts which attract an audience of one thousand people annually.  In May of 2012, the UCC Sanctuary (adult) Choir performed the premiere of Mark Hayes’ Requiem as part of a 200-voice ensemble at Lincoln Center in New York, and this past October, Ms. Harvey and the Sanctuary Choir traveled to Rome to perform its European premiere as part of the Festival Internazionale Di Musica E Arte Sacra at St. Ignatius Church.  While in Rome, Ms. Harvey also conducted a multi-choir ensemble during Mass at the Vatican.

Ms. Harvey has recorded two solo piano CDs featuring repertoire from her Advent Musical Meditation Series, and is preparing a third CD of hymn arrangements for Lent; her compositions have been published by Transcontinental Music.