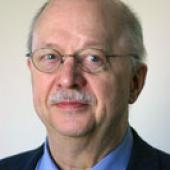 Lowell Lindgren, Professor Emeritus of Music, Ph.D. in Musicology, Harvard University, writes about Baroque topics, focusing on London, Rome and stage design. His publications from 2001 to the present include twenty-five entries in the second edition of the New Grove Dictionary of Music (2001), a two-volume edition of the "Complete Sonatas" of Nicola Francesco Haym (2002), a co-authored edition and study of Agostino Steffani's correspondence in theRMA Research Chronicle (2003) and six articles: (1) “An Intellectual Florentine Castrato at the End of the Medicean Era,” Lo stupor dell’invenzione,” Firenze e la nascita dell’opera (2001), (2) “Oratorios Sung in Italian at London, 1734-82,” L’oratorio musicale italiano e i suoi contesti (secc. XVII-XVIII) (2002), (3) "J. S. Cousser, copyist of the cantata manuscript in the Truman Presidential Library, and other cantata copyists of 1697-1707, who prepared the way for Italian opera in London", in Et facciam dolçi canti (2003), (4) "The great influx of Italians and their instrumental music into London, 1701-1710," in Arcangelo Corelli fra mito e realtà storica (2007), (5) "Bononcini's 'agreable and easie style, and those fine inventions in his basses (to which he was led by an instrument upon which he excells),'" in The Secular Cantata in Late Baroque Italy (2009), and (6) “Handel’s Significance within The King’s Theatre Collection of John Milton and Ruth Neils Ward,” inJohn Ward and His Magnificent Collection (2010). He is a consulting editor for “Recercare” and has served as review editor for the “Journal of the American Musicological Society,” area editor for “The New Grove Dictionary of Opera” and Italian opera editor for “Music for London Entertainment.” For excellence in teaching, he received in 1997 a MacVicar Faculty Fellowship from MIT and the Luise Vosgerchian Teaching Prize from the Max Goldberg Foundation. From mid-1979 to mid-2011, he served as Adviser to Music Majors at MIT.