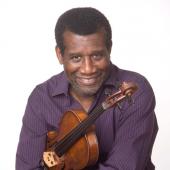 Marcus Thompson, violist, has appeared as soloist, recitalist, and in chamber music series throughout the Americas, Europe, and the Far East. He has been a soloist with the orchestras of Atlanta, Chicago, Cleveland, Saint Louis; The National Symphony, the Boston Pops and the Czech National Symphony in Prague. He performed Keith Jarrett’s Bridge of Light with the Atlanta Symphony, the West Coast premiere of John Harbison’s Viola Concerto with the Los Angeles Chamber Orchestra with the composer conducting; the Chicago premiere with the Chicago Sinfonietta, and the Boston premiere with the New England Conservatory Honors Orchestra. He has received critical acclaim for performances of the Penderecki Viola Concerto with the MIT Symphony Orchestra in Boston, and London, U.K., for the premiere of Elena Ruehr's new Viola Concerto Shadow/Light with the New Orchestra of Washington, and for the premiere of Olly Wilson's Viola Concerto with the Rochester Philharmonic. He has performed Hindemith's Viola D'Amore Concerto, Kammermusik #6, with the Philadelphia Orchestra in Saratoga, and Concertos by Vivaldi at the Bravo Festival in Colorado and at Aston Magna in Great Barrington, MA.

He has premiered and performed many recital and chamber works by MIT composers including Peter Child, Keeril Makan, Charles Shadle, John Harbison, and recorded Barry Vercoe's iconic Synapse for Viola and Computer. His recording of Concerto for Viola, Chamber Orchestra, and Percussion commissioned from composer and organist Anthony Newman in 1985 has just been re-released with concertos for five other instruments by the composer. Thompson's recordings with orchestra also include concertos by Hindemith, Bartok, Serly, and Bloch along with works by Francaix, Martin, and Jongen. Two new releases include Elena Ruehr’s Shadow/Light with the New Orchestra of Washington, and John Harbison’s Viola Concerto with BMOP.

Mr. Thompson has been a guest of the Audubon, Borromeo, Cleveland, Da Ponte, Emerson, Fine Arts, Jupiter, Lydian, Miami, Muir, Orion, Shanghai, and Vermeer String Quartets; and a frequent participant at chamber music festivals in Anchorage, Seattle, Sitka, Los Angeles, Montreal, Edmonton, Rockport (MA and ME), Rio de Janeiro, Spoleto, Amsterdam, Dubrovnik and Okinawa. He has appeared as a frequent guest of the Chamber Music Society of Lincoln Center and on a Live from Lincoln Center telecast. He appears on recordings of chamber works with artists for the Sitka Summer Music Festival, Stichting Reizend Muziekgezelschap, and the Boston Chamber Music Society.

Born and raised in The Bronx, NYC, Mr. Thompson earned the doctorate degree at The Juilliard School. He currently lives in Boston where he is a member of the viola faculty at New England Conservatory of Music, and violist and Artistic Director of the Boston Chamber Music Society since 2009. Marcus Thompson is the founder of the MIT Chamber Music Society and of the Emerson/Harris private study program named for MIT alumnus, Cherry Emerson (SM 1941) and Ellen Harris (Associate Provost and Class of 1949 Professor of Music Emeritus). In 1995 he was named a Margaret MacVicar Faculty Fellow and Robert R. Taylor Professor of Music. In 2015 he was appointed Institute Professor.