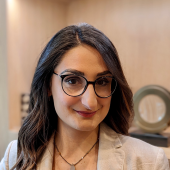 Maria De Simone’s research brings together performance history, immigration law, and critical race theory. She received her Doctorate from the Interdisciplinary PhD in Theatre and Drama program (IPTD) at Northwestern University in 2021, and comes to MIT following a term as Visiting Assistant Professor at Brown University’s Pembroke Center for Teaching and Research on Women. Prior to her academic activities, Maria was a dancer and theatre production manager in Rome, Italy—her country of origin.

At MIT, Maria will complete a book manuscript tentatively titled Faces of Many Colors: Immigrant Racial Impersonation in American Popular Entertainment, 1870–1920. The project explores racial impersonations by first and second-generation Irish, Chinese, and Jewish artists during this time period. At that point the United States had absorbed the highest number of immigrants from the most varied national, ethnic, and cultural backgrounds since the country’s foundation. The book argues that on the immigrant artists’ already racialized bodies, racial impersonation challenged fixed conceptions of racial subjectivities, understandings of immigration law, and belonging to the American national ethos. This is made apparent by analyzing performance in relation not only to the contemporaneous theatre scene but also evolving racial theories and immigration policies. These may appear as distant and separate domains; however, Maria’s research emphasizes their intersections and cooperation in organizing American society.