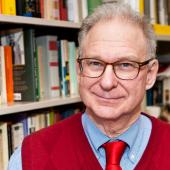 Martin Marks, Senior Lecturer, is a musicologist specializing in the study of film music. He received his AB and PhD degrees at Harvard University, and is the author of the pioneering book Music and the Silent Film (Oxford University Press, 1997). Frequently he performs live piano accompaniments for silent films. He served as Music Curator for four award-winning DVD anthologies in the series Treasures from American Film Archives (published by the National Film Preservation Foundation between 2000 and 2011). In 2017, he was cited for a special commendation by the Boston Society of Film Critics, “for enhancing Boston audiences’ enjoyment and understanding of silent movies with stellar musical accompaniment." Published articles include studies of scores for landmark sound films, including Casablanca and great comedies written and directed Preston Sturges.  He is working on a book about the continued life of silent cinema, with attention to a number of classic silents and the diverse musicians (himself included) who have accompanied and scored them in contrasting ways. He is also starting to develop plans for a database on popular songs in music. Martin greatly enjoys teaching several subjects, including the Music and Theater Arts Section’s introductory survey of Western music (21M.011), and more advanced classes on film music, stage and film musicals, and twentieth century "classical" concert music. He is an avid crossword puzzler and a decent bridge player with more enthusiasm than skill.