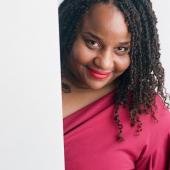 Cunningham's forthcoming book chapter, “The Hush Harbor as Sanctuary: African American Survival Silence During British/American Slavery,” will be featured in a Bloomsbury collection called Sonic Histories of Occupation: Sound and Imperialism in Global Context (Taylor and Skelchy, eds), forthcoming in 2022. Another book chapter, “Singing Power/Sounding Identity: The Black Woman's Voice from Hush Harbors and Beyond” is included in The Routledge Companion to Black Women’s Cultural Histories, edited by Janell Hobson (2021). Cunningham is completing a PhD at the W.E.B. Du Bois Department of Afro-American Studies at the University of Massachusetts, Amherst in Africana studies with a concentration in ethnomusicology. Cunningham received a MA in Afro-American Studies from UMass, a MA in ethnomusicology from the University of Maryland, College Park, a MA in jazz performance from the Aaron Copland School of Music at Queens College and a Bachelor of Music in jazz studies from Howard University. In 2017 she received a Fulbright fellowship to research how traditional music is used to teach national identity to primary school students in Botswana. Cunningham is also a two-time award recipient of the National Endowment for the Humanities Summer Scholar fellowship to study African American Gullah culture, as well as African American culture and blues traditions in the Mississippi Delta. In 2016 she received a Fulbright Teachers for Global Classrooms fellowship and a Fund for Teachers fellowship to research traditional music in Ghana and India. She has presented her research and writing at conferences nationally and internationally. These include the Society for Ethnomusicology, the Association for the Study of African American Life and Culture (ASALH), the National Council for Black Studies (NCBS), the University of Nottingham, the University of Albany and New York University. She most recently presented a paper at the University of Edinburgh in Scotland.

​Maya Cunningham has traveled all over the world conducting research and learning traditional music, especially on the African continent. She is a member of the Society for Ethnomusicology, Secretary of the African and African Diasporic Music Section, and Co-Founder of the Jazz Special Interest Group. She is also Co-Chair of the HBCU outreach committee of the Gertrude Robinson Network of Black Ethnomusicologists.