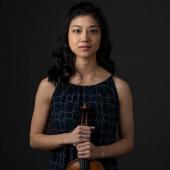 An avid chamber musician, Natalie has toured throughout New Zealand in concerts presented by Chamber Music New Zealand and in the UK with the Scottish Ensemble. She has appeared as a guest artist with NZTrio, and performed alongside musicians including Paul Kantor, Jon Kimura Parker, Kyung Sun Lee, Brian Connelly, and Clarice Assad. As a soloist, Natalie was a prizewinner at the 2013 Michael Hill International Violin Competition and the 2012 Klein International Strings Competition, and has performed with the New Zealand Symphony, Auckland Philharmonia, Master’s Sinfonia (California), and Erie Philharmonic (Pennsylvania). A Britten-Pears Young Artist from 2011-13, Natalie was concertmaster of the 2013 Britten-Pears Orchestra and a member of Aldeburgh Strings, which has recorded for Hyperion Records. She has been featured on Houston Public Media, Radio New Zealand, and Cleveland’s WCLV, as well as in the Houston Chronicle, Arts+Culture Texas, Houstonia Magazine, Houston CityBook, and New Zealand Women’s Weekly.

In 2020, Natalie was appointed Assistant Professor at Massachusetts Institute of Technology’s Music and Theater Arts, where she teaches Chamber Music and Advanced Music Performance. In the past, she served as teaching assistant to leading violin pedagogue Paul Kantor at both the Aspen Music Festival and School and the Cleveland Institute of Music, and taught undergraduate courses in music theory at Rice University. Natalie completed her Doctor of Musical Arts at Rice University’s Shepherd School of Music, under the mentorship of Paul Kantor and Karim Al-Zand, where she was the recipient of the Lodieska Stockbridge Vaughn Fellowship, the Sviatoslav Richter Fund for Music Outreach, and the Mary Hobson Teaching Fellowship. She received her Bachelor and Master of Music degrees at the Cleveland Institute of Music. Besides music, she enjoys graphic design, yoga, and sewing. She resides in Boston with her husband, architect Tucker Douglas.