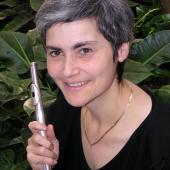 Sue-Ellen Hershman-Tcherepnin first appeared with the Boston Symphony Orchestra as flute soloist at the age of 16, and has subsequently performed throughout Europe, Latin America, South America, Russia, China and the US as both soloist and recitalist. With pianist David Witten, she frequently performs as a member of Dúo Clásico. Since 1986 the Duo has represented the US on State Department-sponsored foreign tours.

Deeply committed to new music, Sue-Ellen performs regularly with numerous contemporary music ensembles. She has given many world premieres, including flute concertos by Tom Flaherty and William Eldridge, the latter of which was written in memory of her late husband, composer Ivan Tcherepnin. She has been flutist with Dinosaur Annex Contemporary Music Ensemble since 1985, and was appointed Artistic Director in 2002.

Ms. Hershman-Tcherepnin has been a visiting artist at many universities and conservatories, including the Shanghai Conservatory (China), the Mozarteum (Austria), and the Porto Allegre Conservatory (Brazil).  Closer to home, Sue-Ellen has taught at South Shore Conservatory (Hingham, MA), New School of Music (Cambridge, MA), New England Conservatory (preparatory division) and Tufts University. She has served as the principal flute instructor at MIT since 1991, where she is also founding director of MIT’s Flute Ensemble, The Institooters. From 1995-1999 Hershman-Tcherepnin also served as President of the 1800-member American Federation of Musicians Local 9-535-Boston.