Raised by parents of Indian-South African and Russian-Jewish heritage, Keeril Makan was immersed from an early age in a broad array of musical cultures—rock, blues, western and Indian classical traditions—that give color and edge to his musical ideas. He “brings the spirit of his diverse musical inheritance into the still center of his compositions, building structures with deep patience and infinite calm. Makan, who teaches at M.I.T., may be surrounded by high technology, but his music reveals an abiding affection for acoustic instruments” (The New Yorker).

Dream Lightly includes four of Makan’s works that combine lyric and harmonic musical qualities with the most advanced techniques of electronic music. The album’s eponymous track requires electric guitarist Seth Josel to play delicate and ethereal harmonics for almost the entire work. According to Makan, it is not a concerto in the traditional sense. “Rather it is as if the orchestra exists inside of the guitarist’s head, helping, supporting, and coloring.” 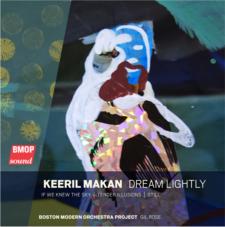